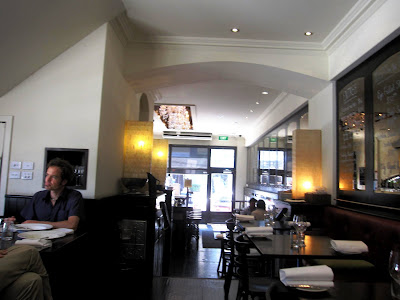 In the lead-up to the opening of Maze Melbourne, I've been thinking a lot about Gordon Ramsay.

Okay I lie. I think a lot about Gordon Ramsay all the time (Yes, I'm sad but not as much perhaps if the object of my affection was, say, a 16-year-old teenage sensation). As a consequence of having followed Gordon (first-name basis...score!) through every season of every show he's ever made, my experiences while eating out are usually marked with reverential and religious reveries of 'WWGD'.

What would Gordon do? 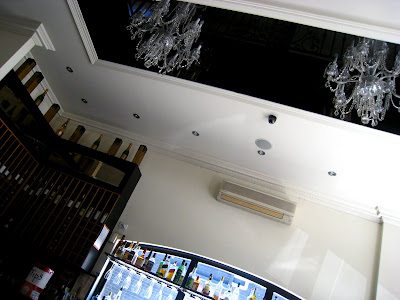 The name of Gordon's game is consistency. Therefore, I deduce that he would like Les Boucheries Parisiennes. 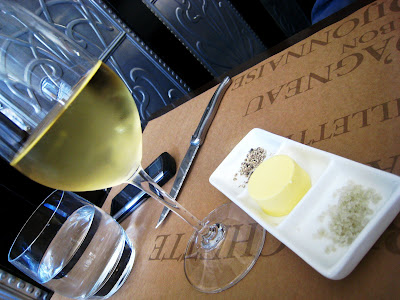 First - some disclaimers. My opinions are based solely on my numerous experiences lunching here with a spectrum of dining partners (friends, family, one-on-ones, and imaginary Ramsays) - the absence of dinners owing only to the fact that I'm rarely in South Yarra at night. Know this - the food here is not groundbreaking. What it is however, is good. Always. 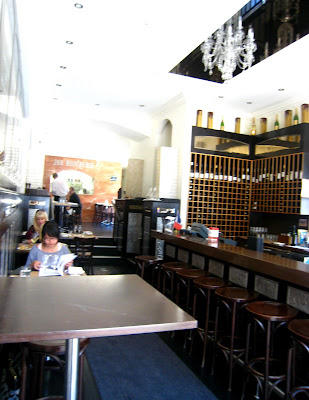 Unfortunately, many restaurants refuse to give its lunch service the same attention and care that they do their dinners (during which fat cats can pay and critics come out to play). Which is why I keep bringing different people back to Les Boucheries whenever I'm in South Yarra for lunch - nothing more embarrassing than being 'The Foodie One' in your network and then bringing your guests somewhere sub-par.

Example of a 'fake' foodie - the type who claims to 'know and love Asian food' (that distinction alone should ring alarm bells) and proceeds to introduce you to China Bar. 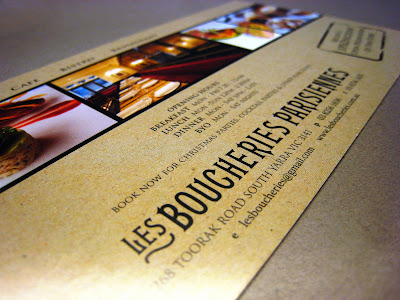 Pick one of these flyers up from any Laurent for a 10% discount at Les Boucheries - there's one almost directly opposite the restaurant itself!

The last time I visited Les Boucheries, I was in the excellent company of my sister and msihua, who graciously got there early and placed our orders for us in advance. 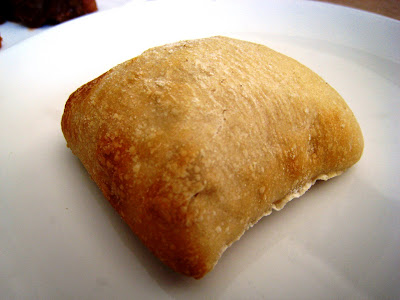 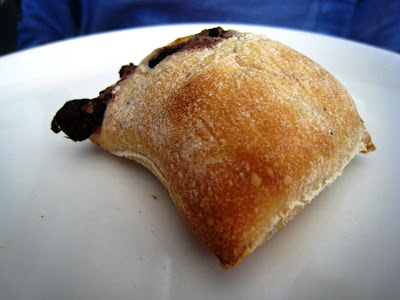 I like this - instead of whipping the excess away, you keep your bread with you the entire meal, politely waiting out of sight. Is this something restaurants usually do in France? Because I know Bistro Vue adopts an identical practice. 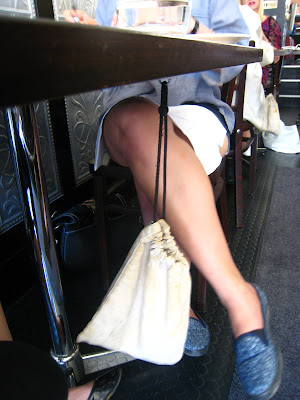 I would only advise ordering from the set menu ($29.00 for two courses and wine/tea/coffee) if you have a long, lazy lunch hour - consider how long it usually takes for two courses to arrive at dinner time and you'll be right. 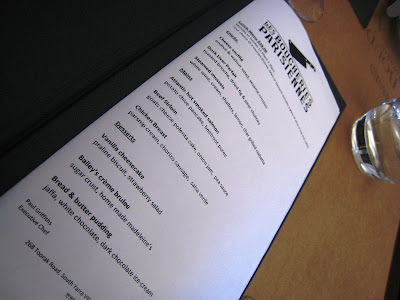 The Lunch Express menu is quicker and more affordable. 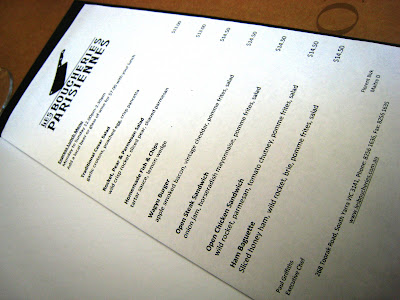 But I can never go past this entrée: 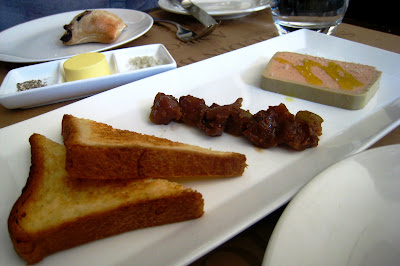 Duck Liver Parfait - with toasted brioche, dried fig and pear chutney
It tastes as gorgeous as it looks. Buttery brioche, with sweet and slightly tart chutney to complement a perfect paté. The dish is deceptively small as it is really very rich.

And being a terrible creature of habit, I can also never go past this main: 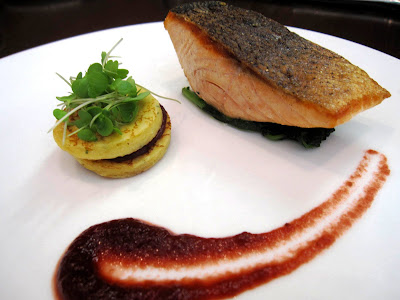 Atlantic hot smoked salmon - with potato chive pancake, beetroot puree
I can never really tell how the salmon is 'smoked', but the flavours in the whole dish are just clean and simple. The pan-fried salmon fillet is not unlike the one I made here, or ate here, and it arrives accompanied by a 'pancake' akin to a potato macaron, with spinach and beetroot. It may not be inspired, but it is beautiful!

mishua's main (she eschewed an entrée in favour of dessert): 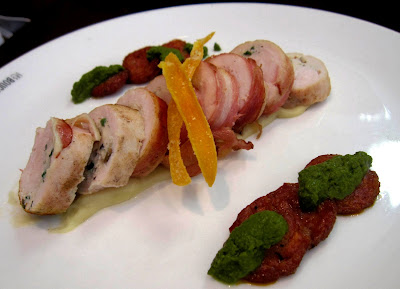 Chicken Breast - with parsnip cream, chorizo sausage and salsa verde
She enjoyed this immensely - the chicken was tender, the chorizo made the dish more interesting and the salsa verde brought it all together. I think a bigger portion might not have gone astray though - on first glance I assumed it was her entrée (albeit a very generous one)!

And her dessert - a naughty Bailey's crème brûlée that tasted very strongly of the drink. With a sugar crust and the teeniest plain madeleines you ever saw, home made of course! 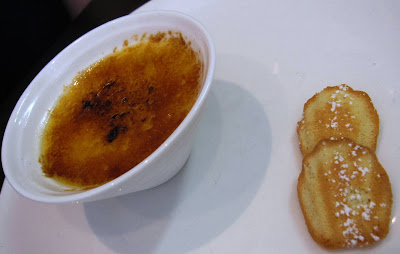 I didn't want msihua to feel awkward having a dessert all on her lonesome, so I had to have one too, because I'm just that sort of person. I was very kindly proffered the entire dessert menu from dinner (at full price of course), and if you thought I could order anything but this you must be mad. 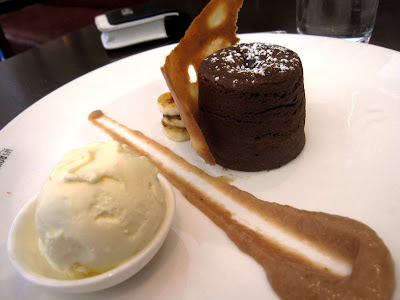 Chocolate fondant, caramelised banana, banana wafer ($15.00) - I'm not sure if this usually comes with vanilla ice cream, as I simply asked if it did and the waiter good-naturedly promised to arrange it. I wasn't charged anything extra either. What a man!
I loved it to the very last lick. In fact, when my sister asked if she could try some (the audacity!), it took immense resources of love and generosity to grudgingly grunt in assent. When she held out her spoon for a second bite I smacked it with my own. Charming, I know. 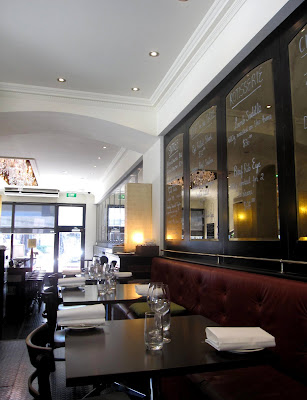 So many places in Melbourne are fun and fresh and light-hearted. I'd say Les Boucheries is classic and conservative, with a very good, old heart. And that's the way I like it. 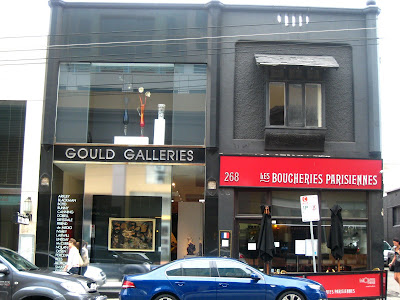