Last week, I was set up on a blind date.

The general consensus was that he was a lot like this other man I'd admired but never approached, that he was just as good but more down-to-earth - and although sometimes rough around the ages, he was a genuine expert at pleasures of the flesh. 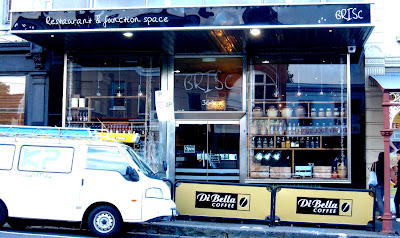 Naturally, I was sold. We arranged to meet on a quiet Wednesday night. And because I'm just a home gal achin' to share the love - I brought my siblings along as well, and for a real sense of occasion, my brother's girlfriend L. 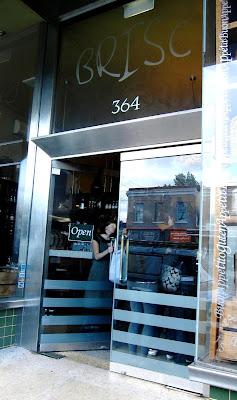 The minute we walked in, I was smitten.

He was very good-looking, and not in the way you'd expect. If I could describe the decor in Brisc with one word, it would be...'bottles'. Beautiful glass bottles of any and every variety litter the restaurant in the most chic and artistic way imaginable. Some stood naked and proud, some were occupied with olives, and some sat patiently in crates and urns, tastefully placed in the window and along the mosaic floor. 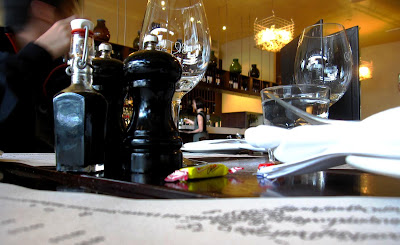 There was no denying it - Brisc was sexy.

Unfortunately, he was also camera-shy, and balked when I tried to photograph him. The waitress was polite enough about it, and agreed to let me take pictures of our meals, just not the interior (though of course, you can sneakily see some of it in the background). I tried not to let it bother me - there are greater men, I know, who shy away from the flash of the lens.

The evening started out well - the man proved most attentive. Our water was refilled even before our bread arrived, and the merest glance over batted eyelashes would invite a solicitous inquiry as to whether we wanted, needed anything. 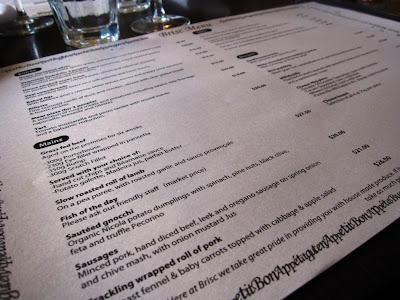 Confronted with such charm, it seemed churlish not to overlook the fact that the bread was insipidly cold and white, and accompanied with olive oil, instead of proper butter. 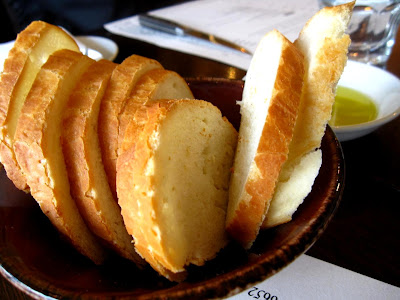 And that despite the sensual sounds of jazz in the background, we could hear our orders being hollered at the chef in the kitchen, though we sat clear across the dining room.

Then, our mains arrived, and they were as beautiful as you'd expect...though a tad small. Regardless of what's been said, we all know size does matter. 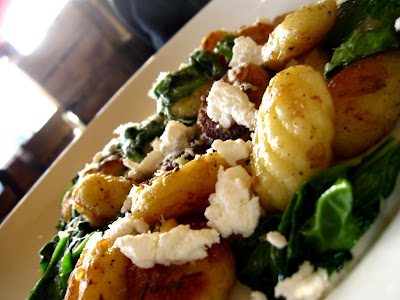 Texturally-light, with lovely flavours of truffle and olive, and the pine nuts crunchily complemented the soft gnocchi. More importantly, the dish was beautifully seasoned. Unfortunately, hers was the only one. Maybe the man is of seafaring stock, I wouldn't know, but salt would indeed become a recurring theme throughout the night.

I suffered immense food envy when my brother's steak arrived - it was cooked to perfection. 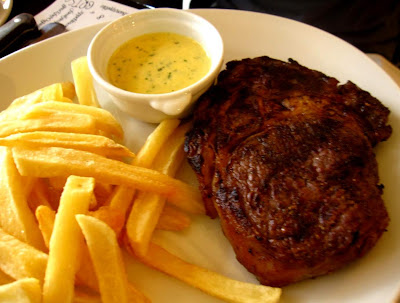 However, it inexplicably wore a very discernible coat of salt. It wasn't awful in any sense, especially with forkfuls of chips and plenty of water (now necessary), but it did slightly let down a very good cut of steak. Good enough to warrant a repeat order, but I'd suggest you qualify it with a low-sodium request.

This was mine, and it was...alright. 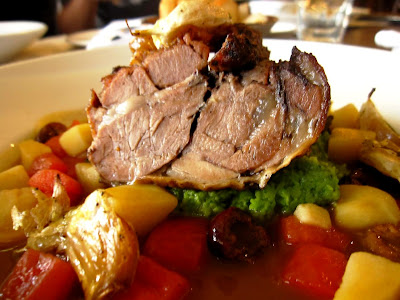 Slow roasted roll of lamb - On a pea puree, with roasted garlic and sauce provencale ($27.50)

In a dish like this, the meat is the star. So while its supporting actors were lovely, like the flavoursome puree, the juicy diced vegetables, and the interesting cloves of garlic (smashed in their own skins), they couldn't mask the fact that the lamb was oversalted, and perhaps correspondingly, less tender than one would hope. It's always a bit disheartening to order a dish you know you can cook better. Overall? Passable, but no cigar.

Last and least - my sister's order. 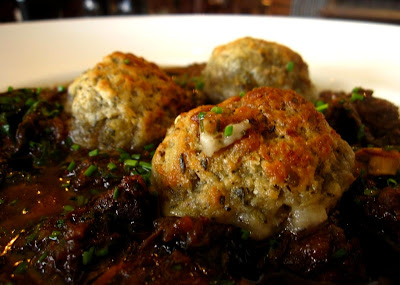 It was listed on the specials board, and the waitress did a fabulous job selling it. Unfortunately, that was as far as the fabulousness went. The stew was terrible. It was so salty, it was almost inedible. Luckily(!), the mushroom dumplings were so bland that my ravenous sister just mashed it altogether (with donations of scraps from our plates), and powered through. 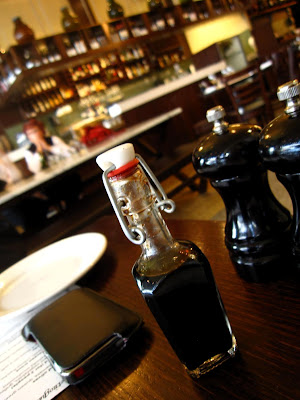 Now, any women's magazine will tell you that the true test of a man's mettle is his ability to listen. We noticed that the venison was removed from the specials halfway through dinner, and deductively reasoned that my sister must have received the salty dregs of the pot. When asked, the waitress confirmed that she had been served one of the last two dishes of the day. Her response to the fact that it was "unbearably salty"? First, a defensive "Well the dumplings have salt in them, so...yeah." When informed that it was in fact the dumplings that were bland, and the stew oversalty, her disbelieving response was a curt, "I'll tell the chef." That was the last we heard of the matter, despite the obviousness that our complaint could be immediately confirmed by a simple tasting of whatever remained in the pot.

We stayed for dessert, but only because we'd ordered it from the outset. It was sweet, sizeable, and I'd recommend it to anyone who loves rhubarb. 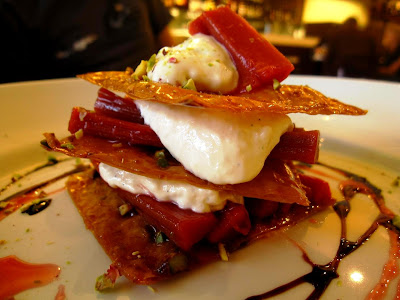 Personally though, I couldn't get out of there fast enough. Like an episode of Sex and The City, Mr. Brisc seemed a dream at first, but quickly turned very ugly. And although I believe that there are several Mr. Rights for everyone, he certainly wasn't one of them. He wasn't even Mr. Right-Now. 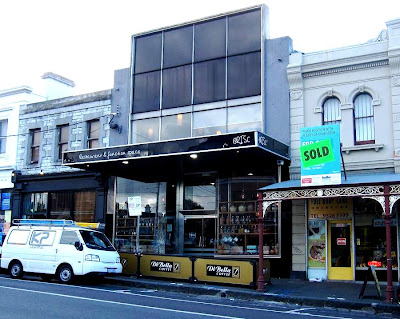 Plus - the man was mean to my sister! I'm a home gal...and you know I'm not gonna stand for that.