Clearly, apologies are in order. Yet with all the audacity and heedlessness of a negligent mother, I beg that you disregard my inability to nurture a healthy, breathing child and instead celebrate my attempts to resuscitate it.

And celebrations were indeed the order of the night, with my coy companion at its crux; and surely, surely there is no better place to bring out the balloons than at Victoria's 'Best Fine Dining Restaurant'? 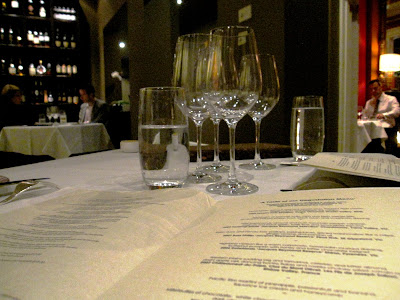 No, I didn't think so either. And indeed the night began exceedingly pleasantly with some puffs. 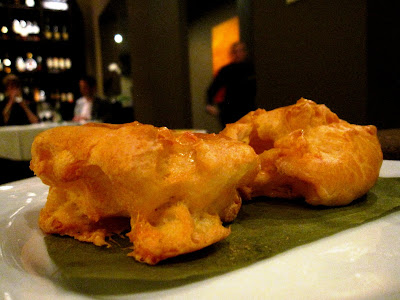 Gougères!
Or cheese puffs, for the uninitiated. And excited I was, having first admired them in here. 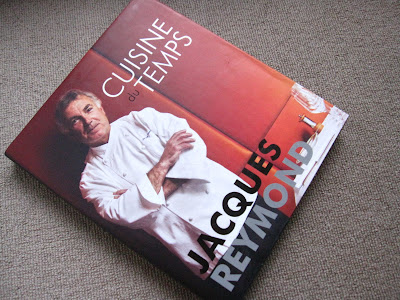 As I made a point of boasting to the waiter (yes I am that sort of customer), I also remembered that they'd been described as an 'appetiser served for 27 years'. For such old ladies, they were very light and sprightly! 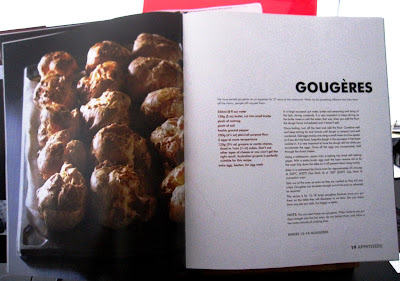 Happily, the bread also arrived warm. I put great store by great bread, and these were lovely. 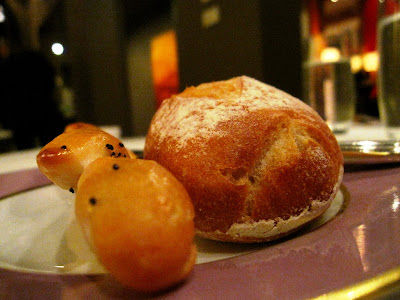 Sadly, they would be only the specimens that we would receive over a dinner spanning almost four hours. But more on that later. 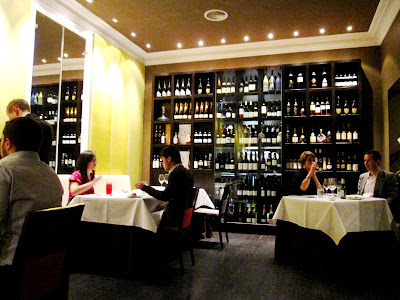 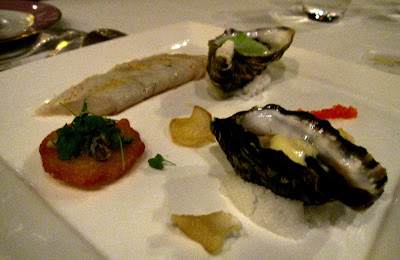 The Ocean - flounder and oysters, fresh wasabi.
warm flounder ‘sashimi’ with fresh grated horseradish and togarashi, a natural oyster and sea water, a warm oyster with wasabi dressing, crispy tempura of white anchovy
Interestingly, I believe the 'sea water' in question was not simply sea water but a refreshing sorbet (that green there, look!). Do not, in your excitement, attempt to salvage any that drips over the oyster's shell into its bed of salt. A spoonful of salt, sadly, does not help anything go down. Personal stupidity aside, I enjoyed the warm oyster better (steamed I was told it was). The flounder was delectable (the celebrated one said it had pop!) but the anchovy crisp, unfortunately, was just that - a crisp. Had I not known it contained anchovy, I would never have guessed. If you do not care for anchovy, this is probably a good thing as it was texturally perfect! 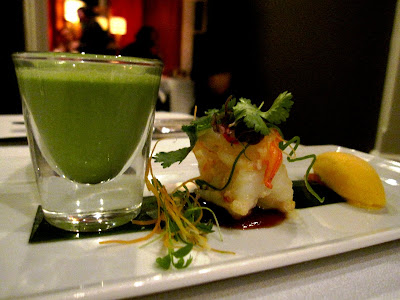 Lemongrass, spinach and rock lobster soup, fragrant Tiger prawn, sweet potato and turmeric ice cream
Like a good book, you are advised to dig in from left to right. The soup was an excellent example of a laksa, but quickly forgotten, as the prawn was fabulously fresh with a juicy, yielding bite. The ice cream was very mild despite its intimidating ingredients. For this, I was actually quite thankful, having once sampled a very unsuccessful curry ice cream at Sofitel's No 35. Let's just say, Maggi would have been proud. 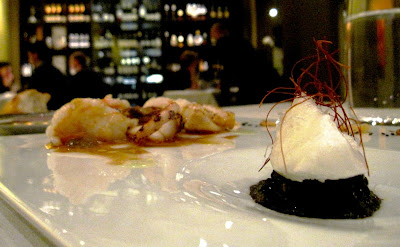 Making a reference to paella
black rice unctuous, parmesan snow egg, wok of squid, crustaceans, chicken brisket and giblet, broken juices and saffron oil, smoked peppers
I liked this, but I would not have described this dish as making any reference to paella beyond "This is clearly nothing like a paella." 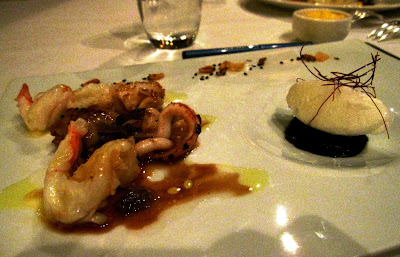 The black rice was a good savoury throwback to 'pulut hitam' if you've ever had it. I think the words 'snow egg' gets everyone's blood pumping post-Masterchef; in this event, it was nothing more (or less!) than a light meringue. The medley of seafood and chicken was the superstar of this dish, and tasted much like an extended explosion of the previous prawn. I am not ashamed to say I wiped my finger on the plate and licked it. I am probably a little ashamed I used more than one.

Second course of the degustation: 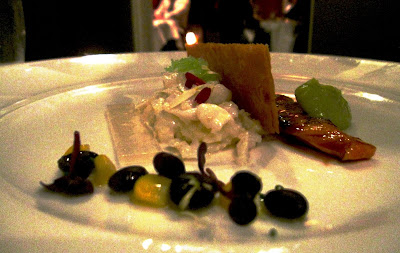 Sandwich of spanner crab, mirin and fresh wasabi jelly, lacquered Petuna ocean trout, black bean and sweetcorn dressing
I always like crab when it's been shelled for me! I think this dish worked well because of its amalgamation of textures. The crab was smooth on the lips, the lacqured trout was as crisp as suckling pig skin (indeed, that is what I thought it was at the time), the bee-ish beans were cooked well and the wasabi jelly was much less confronting than expected.

Third course of the degustation: 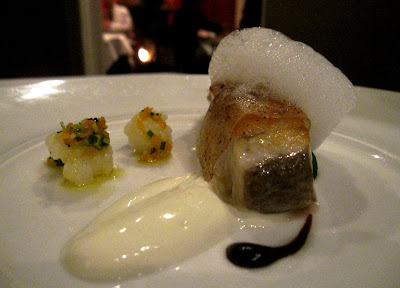 Wild barramundi, almond and bush mountain pepper caramel, yoghurt and black garlic, kaffir lime and lemongrass espuma
I am always deeply suspicious of anything that arrives with foam. It stems from the disbelief that my 'food' is literally disappearing before my eyes, which is always a problem when your photography skills are less than expeditous. However I won't begrudge the fact that it did impart the subtlest of flavours to the fish. Also, I shouldn't talk, really, having declared pompusly that '[t]he sauce has so much butter!" only to be informed by my long-suffering companion that it was in fact, yoghurt. 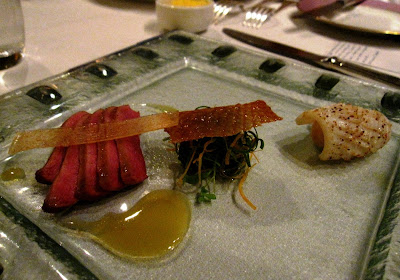 Sweet and sour pekin duck like tucupi
a spiced nougatine of flaked salt and ginger, a lemon sauce, sourness of wilted sorrel and crispy duck skin salad, four pepper squid and yoghurt
This was the last of the three 'Carte' dishes. There's nothing in here I didn't like, although I did find it slightly pretentious that the batter for the pepper squid was rolled inside the squid, as you can see here. 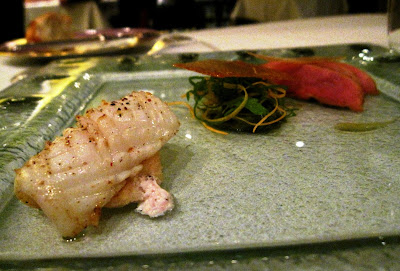 But the duck was very tender, and the redness in the picture is quite misleading; I might actually have preferred it a little less cooked!

The remaining dishes are from the degustation. 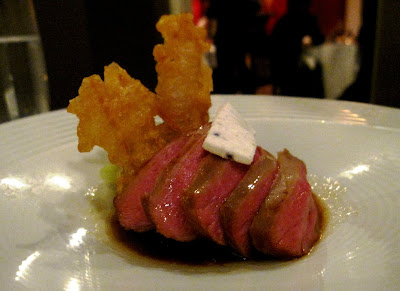 Pekin duck and Hervey bay scallops, peking juices, spiced marshmallow like a crêpe, ginger sesame and pandan oil
The duck was very similar to the one on the 'Carte' menu (I might even go as far to say that it was identical), and the scallops were adorably chubby. The most intriguing item on this dish for me was the marshmallow, which I did not realize one could manufacture outside a factory, let alone in a kitchen. I have since been enlightened by my knowledgeable friends Google and Taste.com.au. 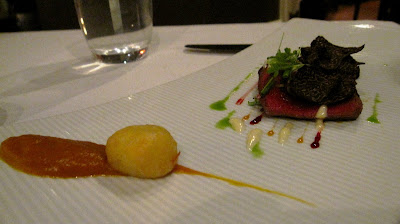 Highland venison like a warm carpaccio, horseradish mustard dressing, butternut pumpkin with honey and bitter chocolate beignet
My absolute favourite dish of the night as I am a carnally craving carnivore and chocoholic. And if you thought you spied something with your little eye, you're right. 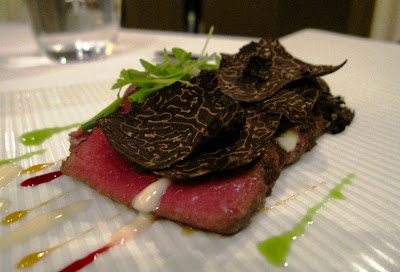 Truffle. Two grams for twenty-five. Terrific. Tantalizing. Tumultous. Pardon my thrilled tittering. It was very, very good. I might even say, very very wicked. Also, this was my first foray into venison. I don't know why I always thought it would be tough on the teeth. It turned out terribly tender. And yes, I'll stop now. 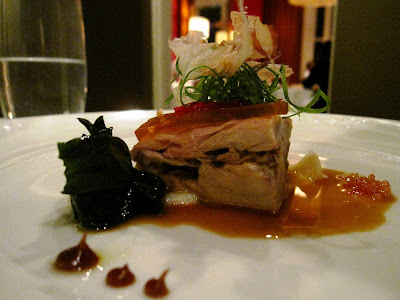 Western plains suckling pig and tamarind, celeriac and bitter almond,
dashi apple veil, dancing bonito flakes and rosella chutney salad, cavalo nero
Sadly overshadowed by the preceding dish, I still really liked the pork, though I was disappointed by the absence of crackling. The bonito flakes were an interesting addition, as I've never had it paired with pig. To be perfectly honest, I'm not sure it added much in the area of flavour, but it was certainly very pretty! 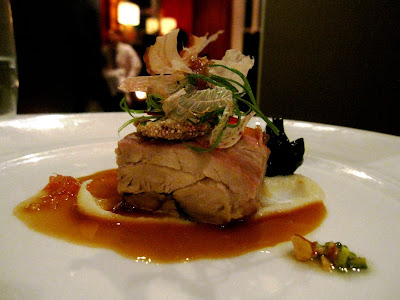 I also liked the accompaniments; they were very reminiscent of the dependable piggy sides of apple and cabbage. 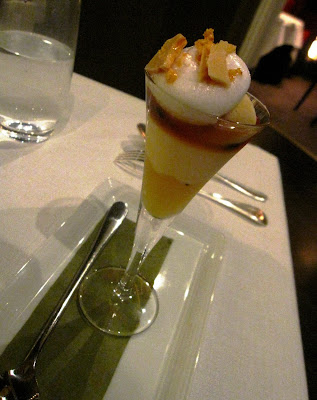 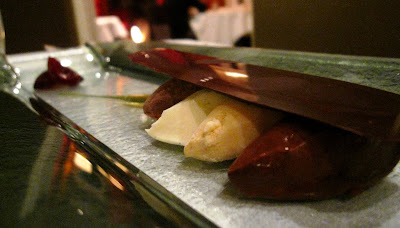 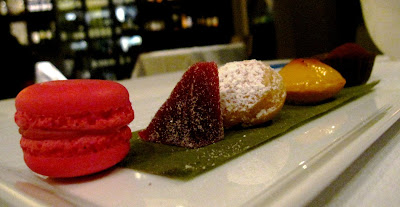 Now for the disclaimers. I loved the food, it was faultless. And I am such a groupie foodie that I almost swooned when Jacques Reymond himself stopped by to say hello. I might even have asked for a photograph had it not been for the strange events that punctuated our dinner. And I will list these from the nagging niggling to simply startling:

1. As I said previously, we were never offered more bread, even when we were clearly picking at the crumbs.

2. There was an actual need to pick at crumbs. Our first few courses took absolute ages to arrive; I would estimate a good 30-40 minutes or more between the first three, and it was already 10pm (we arrived about 7.40) by the time we received the third appetizer. No explanation or apology was received, but I am quite certain that this was because of a function that was taking place upstairs. 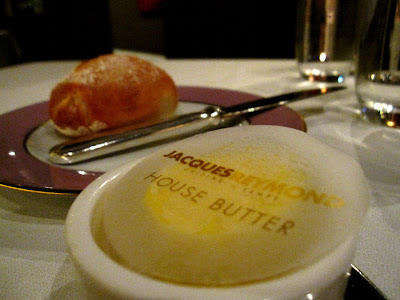 3. It was very loud. Not because of the other patrons, nor the function, but because the kitchen door was left open, and there was a great amount of shouting going on throughout the night.

4. The shouting was not of the typical kitchen type (or perhaps it is, and I am simply oblivious to the foibles of the business). At several times, it was of the aggressive and dare I say abusive variety, e.g. "IT'S BEEN HALF AN HOUR M------, THAT'S NOT GOOD ENOUGH!" and "WHAT ARE YOU DOING?" Very Gordon Ramsay-eque, but less entertaining off the screen. Interestingly, the wait staff did not bat an eye. 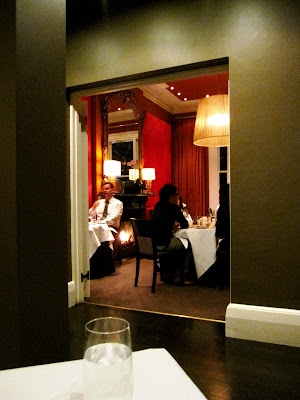 So I'm torn. Definitely not the best of fine dining experiences, Victoria Awards notwithstanding. But it was clearly a very unusual experience and I suspect the kitchen was having a really bad night. And the food was outstanding even so. 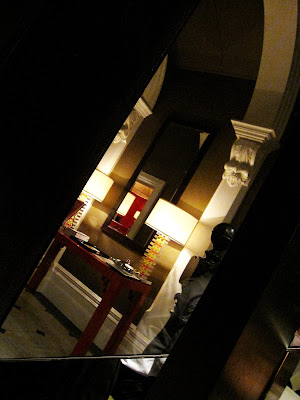 As far as revisiting goes however, I'm not sure I'd risk it. Like the unfortunate M, it just wasn't good enough.