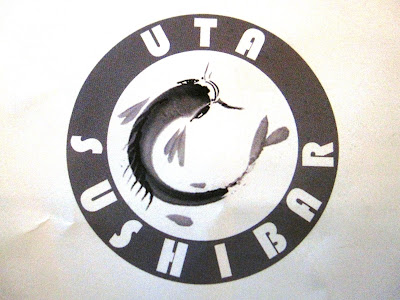 Unfortunately for Curtis, this hardly means Coles to me - especially after this debacle - but it's obvious others don't agree. Personally, I prefer lovely little groceries manned by lovely owners (with love, of course!); preferably as nondescript as possible, would fit right in wherever they're from, and hidden down lonely lanes to add to the mystique. 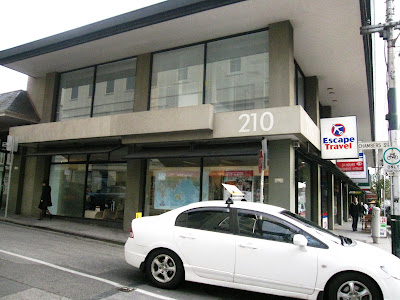 Enter this street.
Clearly, I'm very socialised by the Melbourne doctrine that a place must be hidden to qualify a visit. And in my discoveries I've discovered that I'm usually the last to 'discover' anywhere. Such was the case with Suzuran, which on all accounts was a fantastic Japanese grocery with a thriving sushi/sashimi business on the side. 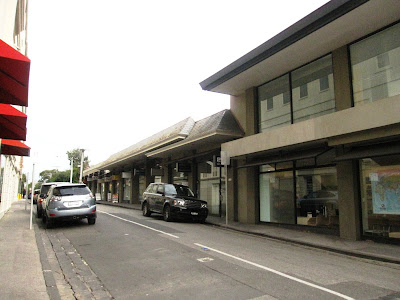 Walk down here.
Unfortunately, by the time I arrived at Suzuran I was a month too late. Website notwithstanding, Suzuran has left South Yarra and Uta Sushi Bar now stands in its place. 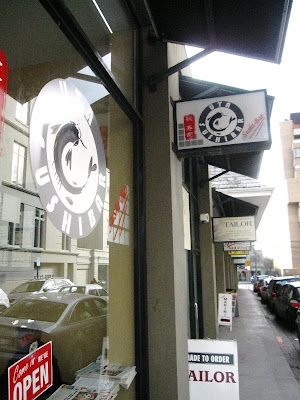 Fortunately, it appears the proprietors are doing their valiant best to fill the shoes they've been handed down. Japanese groceries remain, though the selection is not extensive, and the sushi and sashimi menu is exactly the same. It'd be churlish not to partake of both!

So this is what was browsed: 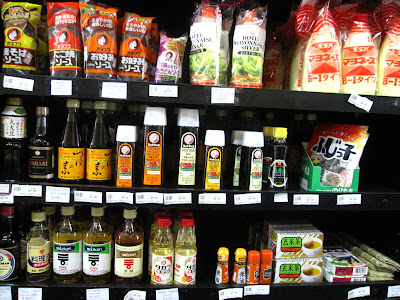 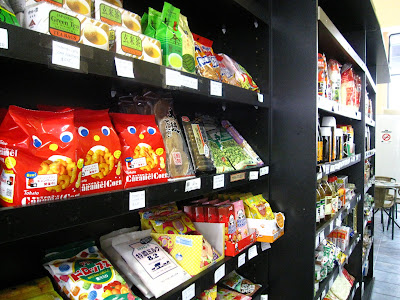 This is what was consumed: 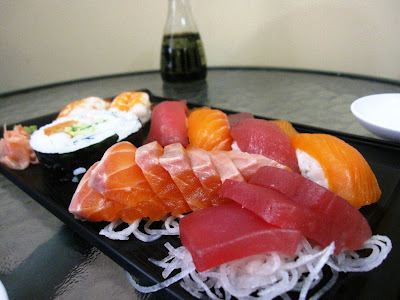 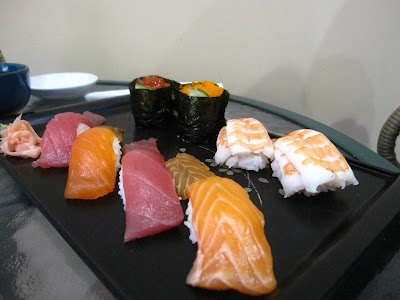 And this is what was bought: 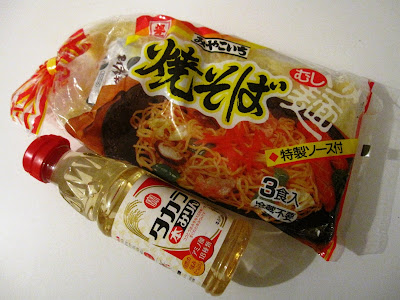 How do I know this grocery would 'fit right in where it came from'? Every label on every item is almost exclusively in Japanese. 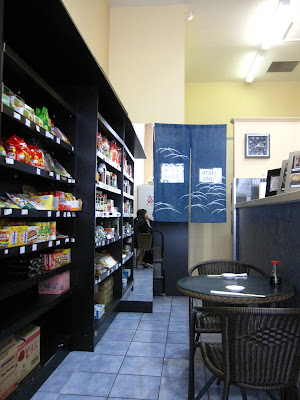 Definitely not your ordinary take-away sushi place, the produce (you know you're addicted to Masterchef when you start referring to everything edible as produce) was of fantastic quality. Fresh and delicate slices of sashimi, sushi laced with authentic mayonnaise right off the shelves (sold in packs of 1kg each!) and placement (and service) so charming and cheerful you're apt to forget that you're one of about five dinky little tables (only two of which were occupied). 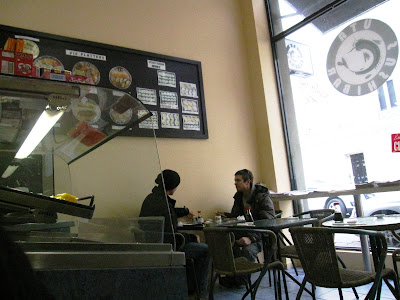 And once again, I have my doubts as to whether I've really 'discovered' anything; the doors are a revolving whirl of shoppers and office workers in the know grabbing boxes to take away. 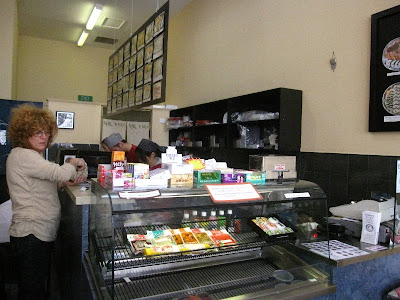 What I am sure of however, is that Suzuran it may no longer be, but Uta is doing just fine for themselves. And more importantly - there's a lot of love in the room!

Apologies for the long breaks between posts as I've been enduring examinations and tailoring a twenty-first. But that's a story for another (very soon) day!

Here is the deal with family. 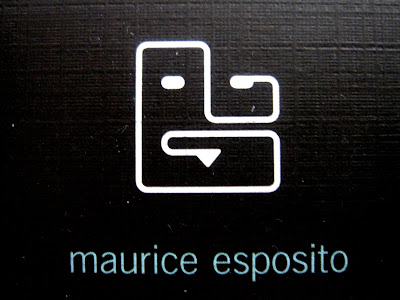 The laws of biology, proximity and moral turpitude decree that you must love your family - and I do. The same laws, however, make it impossible to like your family all the time - and I don't. The 'quarrels' are typically inconsquential: silly squabbles over bathroom business, restless relatives and finicky foodies come to mind. The 'consequences' are similarly insignificant: you wait your turn, you go for a walk, you eat what's on the table and you'll like it. At the end of the day, you love them where it counts. 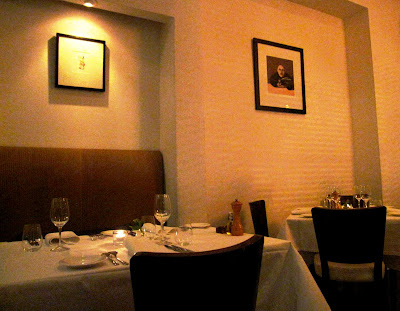 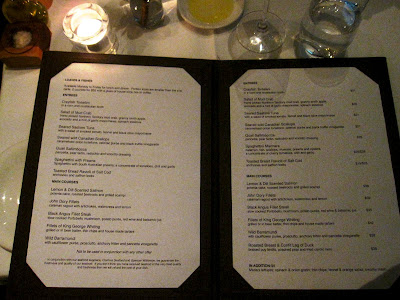 Menu for your perusal - the one on the website is slightly outdated.
So here is the deal with Esposito. There are indeed many 'nice things' to be said.

1. Like family, it's in close proximity, so much so that in the last month alone, I've visited twice with my family - BFF YS, and my mother and siblings. 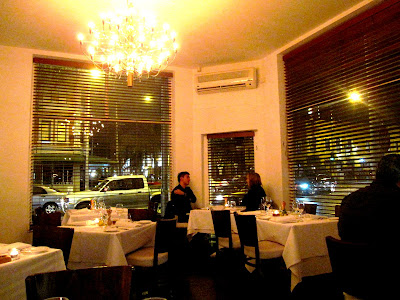 2. No beachside views (the Holy Grail of seafood dining and real estate generally), but it's pretty. And comfy! Plenty of (classy) couch seating - the kind you call shotgun for as children (age of adolescence for most, 21 for my lovely friend YS). 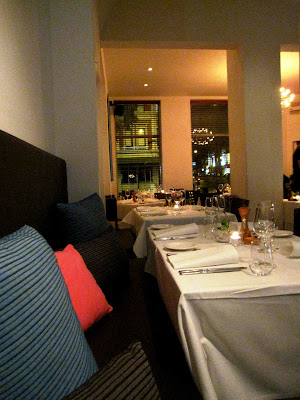 3. The food is fantastic. And just as fantastic - it's consistent. 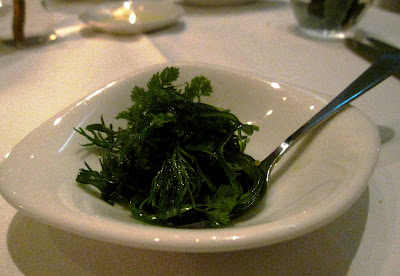 A complimentary amuse-bouche of seaweed.

Very light and refreshing - I've never been so pleased to have a lump of green, gangly strands on my plate.
Our first appetizer: 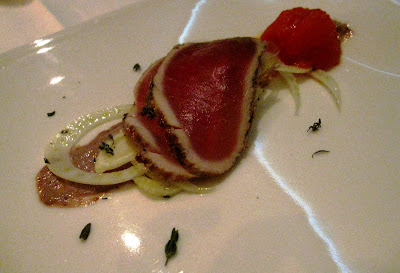 Seared Sashimi Tuna with a salad of smoked tomato, fennel and black olive mayonnaise ($21) [Half-portion]
I could have licked the plate clean. I didn't - and I'll get to this later (basic dining etiquette was not the reason), but this is a dish that is everything it should be. Not groundbreaking in concept, but the tuna was seared enough that the textural contrast of the cooked flesh to the fresh was easily and happily discernible, the smoked tomato was warm and very moreish, and the fennel and mayonnaise subtly enhanced them both. 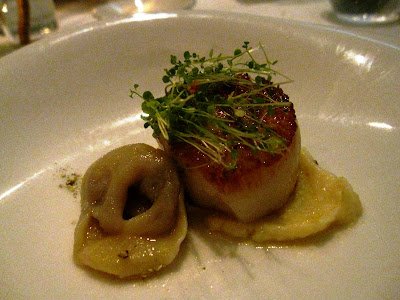 Seared wild Canadian scallops with caramelised onion tortellone, celeriac puree and black truffle vinegarette ($21) [Half-portion]
It was beautiful, really. As is obvious from the photograph, the scallops were burnished perfectly, teasingly resistant within, and although I always think tortellone is too thick and clumsy (having grown up on womanly won tons), the filling was lovely with no overpowering onion overtones. 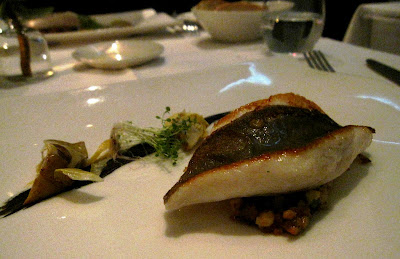 John Dory Fillets with calamari ragout with artichokes, watercress and lemon ($39) [Half-portion]
That I can't seem to stay away from ordering this should speak for itself. The John Dory, on its own, is cooked just right. But the star(fish) for me is that calamari ragout; the calamari is chopped so finely you don't expect to taste it at all, but every (tiny) spoonful is a burst of squidgy squidiness. I've never had anything quite like it. I restrained myself from licking the plate directly, but couldn't help sliding my finger across and well, you know the rest.

Not photographed unfortunately, but also sampled - the Black Angus Fillet Steak (requested rare, and medium rare by my brother and mother respectively on the same visit - both were impressively executed), and a gorgeously generous Spaghettini Marinara, which took three people to polish off (two of us had our own mains). 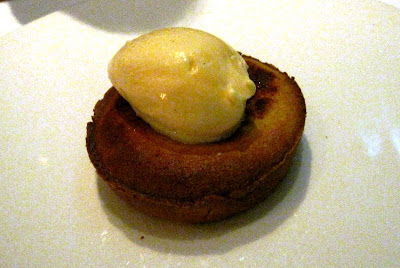 Hot Date Tart with spiced frangipane and vanilla bean ice cream ($18)
YS insisted on ordering this; personally, I detest sticky date pudding. Let me just say - this is nothing like sticky date pudding. Not even the filling of the tart is reminiscent of sticky date. It's soft, slightly cake-y, and the witty 'hot date' is smooth without the cloying sweetness that I associate with fruit pies generally. I liked it so much that YS let me finish it. Best friend ever. 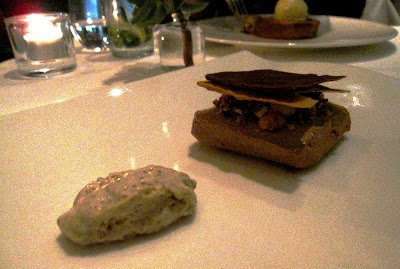 And here is where my failure as a foodie becomes apparent - without a picture of the dessert menu, I can't tell you what this is at all, except that it was a much better version of the chocolate sandwich I had at Cutler & Co, and luxuriantly decadent. That little lump, to my disappointment, was not ice cream, though not unpleasant.

Now here are the things that some (my mother perhaps) would prefer I not say.

1. Time, oh time. This is a place to linger indeed. Menus were slow to arrive, as was the waitress who took our order. And while water is topped up frequently, it's because you'll need it. The food takes a long, lo-o-ng time to arrive. 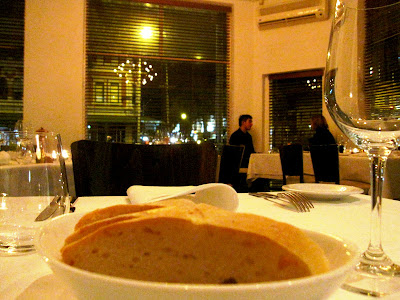 2. The waitresses are always lovely, but service can be scatty. On our first visit, YS and I shared everything and they generously offered to split our dishes, hence the petite portions in the photographs above. On a subsequent visit with my sister, this service was neither proffered nor executed - easily forgivable however, as they were acknowledgedly busier the second time around. 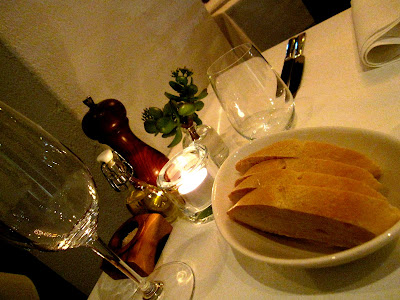 2. The distinction of lovely 'waitresses' above was no accident. Much like a very specifically annoying trait in a family member, a substantial portion of my vexations with Esposito have stemmed from one particular individual. 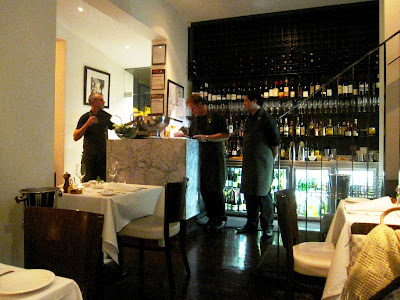 When a customer encounters cling wrap in her seared tuna - which she inadvertently chews and nearly swallows, the expected response is an apology. What is not expected:

Absence of apology aside -
"But you almost ate it clean!"
"What would you like me to do about it?"
"Are you saying you want me to take it off the bill?"

My response? A very measured "I'd like you to do what you'd like to do." The item was taken off the bill. But we really didn't need the 'tude. Which, unfortunately, was apparent again on a subsequent visit with my mother.

"What drinks are we having tonight?" "None thanks, we're driving."
"Are you sure? Nothing to drink at all?"
And though we were sure, "Here is the drinks list! What would you like?"
Finally - an incredulous (and unnecessarily loud) "Really! No drinks at all!"
Glasses were cleared with evident sulkiness.

So yes, I like Esposito - where it counts. I'm sure. Really. 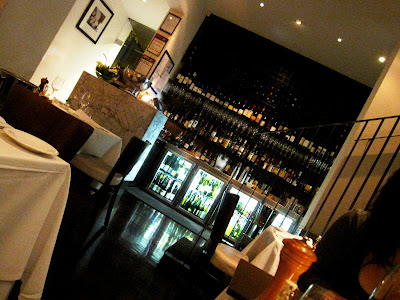 But as yet, it's not quite family.