Everyone likes the coffee here. Everyone.

And everyone talks about it as well. Everyone. 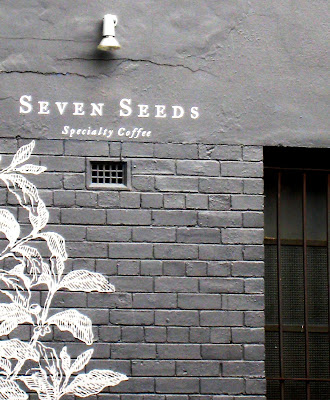 But I am such a dork that I don't really drink coffee. And blasphemously, I can't really tell the difference between a Starbucks and a...hmm, Seven Seeds I suppose. 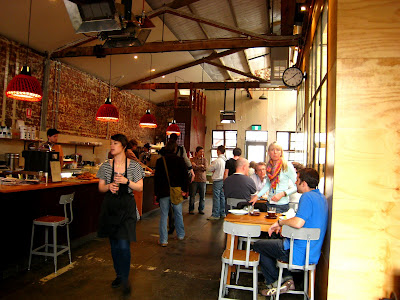 However, because this place is so very close to the hallowed halls of the law school (and so very vogue now) I have lunch here almost every week. Plus it's the only logical option once you've had just about enough of Indonesian tummy-fillers and the greasy Chinese in the other direction.

Surprise, surprise the carrot cupcake. This is my new favourite place to get it, because it's less sweet, has actual cream cheese frosting and the quality never varies - unlike The Cupcake Bakery, which, contrary to my previous testimonial, has been dry and stale(!) the last four times I've had it. In the space of a week. Not good enough! 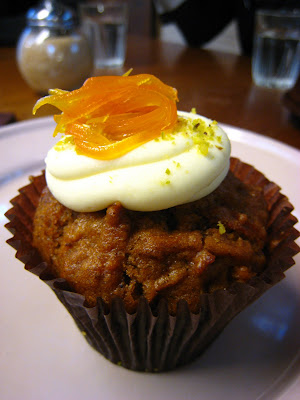 So the Seven Seeds cupcake wins. Even though it's smaller and comes with a $0.50 extra on the price tag ($4.00 each for all the baked goodies).

The chocolate cupcake is really lovely as well, though no pictures because I scoffed it down too quickly. And I love the lime syrup friand, which is always moist and deliciously sour. Interestingly, all the pastry/cakey goodies here are from Dench, which means they're exactly the same as the ones in Auction Rooms. Except they're priced at $4.50 there. I've also had the mandarin and polenta cake and I have to say I did not like it all. There was a bit too much mandarin rind in the mix I think, which made it slightly bitter, and I don't think I'm too fond of the polenta texture either.

As for the savouries, I've had the 'Egyptian Eye' - Beautiful toast obviously, big with lots of chewy wheat bits, and I wish I'd gotten an extra egg to go with it. Came with an interesting chutney-like sauce. I'm not sure the sauce necessarily went with the sandwich, but it was definitely a change (and not an unpleasant one) from the usual sideshows (hollandaise, smashed avocado, etc.). I wish Seven Seeds had more egg options - this is the only one. 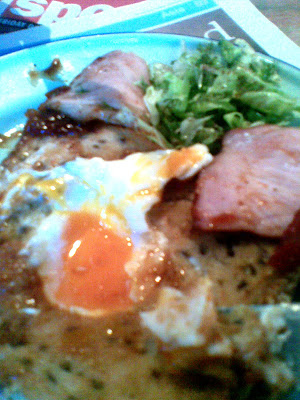 (Apologies for the awful picture, I only had my mobile phone with me the day I took this.)
Anyway, like I said, Seven Seeds has that same warehouse utility-chic look sported by all the cool cats these days, and hence, was an ideal and hip place to meet up with BFF J for lunch. 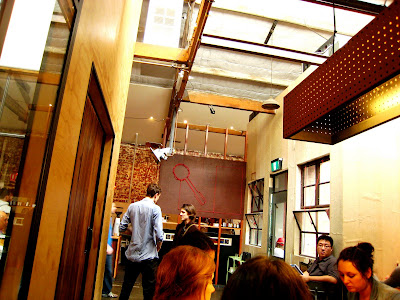 J is a coffee-drinker but not one for words. "Strong...I like it." I suppose that's as good an endorsement as any! 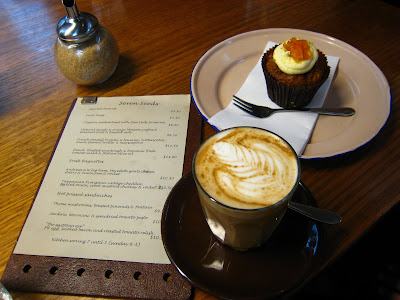 (Click to read the new menu!)
We had the veggo toastie option - mushrooms, fontina cheese, and pine nuts ($9.50). I thought this sounded really exciting on the menu, but to be honest, it's a bit bland until you mix the salad in with your mouthful, which I think adds a bit of acidity to the bite. The mushrooms were as lovely and picquant as they should be, and the cheese nicely melted with a fair pungence. The texture of the bread was as amazing as usual - J suggested we visit Dench Bakers soon to pay homage to its origins - and I totally agree! 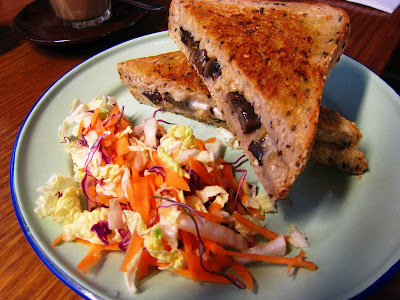