It's funny how you never go somewhere for ages and then suddenly find yourself there twice in a week. I'm back in St Kilda - BFF Yunn turns 21, and being the ultra-generous creature that she is, hosts a gorgeous private dinner at Sapore, which is newly-hatted, and always pretty. I should probably start by saying that this isn't the first function I've attended here - the place, honestly, is quite beautiful, and perfect for the most 'elegant' of dinners - especially in comparison to some other hatted restaurants we checked out in the Carlton area. To be fair, however, most of those are converted houses, and perhaps don't have the scope for the kind of modern architectural design sported by Sapore. 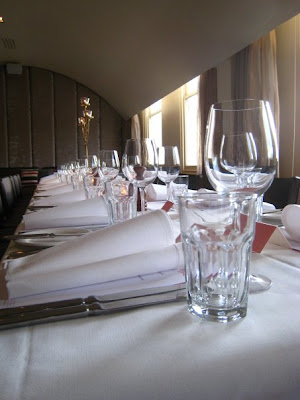 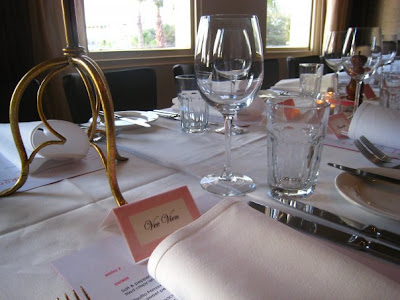 (Placecards not provided, the hostess made ours)
And so - to food. In my opinion, the function menu is competitively-priced - especially when you consider the fussy $100 meals that other restaurants were proffering in venues much less attractive *cue sour look. I also detest places that are inflexible about their minimum spend, especially if it's a weekday function and and the room isn't being used anyway - it's such a silly way to turn off potential future customers and lose a veritable source of income for the restaurant. Happily, Sapore was flexible on the most parts regarding the minimum spend, especially as there were only about 20 of us.

The menu draws on dishes from the actual menu, so the prices listed below are as per ala carte (obtained from their website).

Choice of three appetizers, and like any seafood aficionado, I pick the 'Salt and pepper calamari with a salad of bitter leaves (read: rocquette), garlic, aioli lemon and fig vincotto (huh) - $18.' 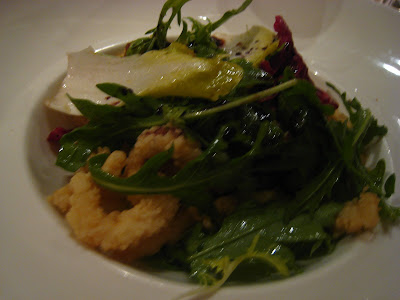 And I have to say, I was very happy with this. I know it's not the most original of dishes, but the calamari was crisp and fresh - though I can't say it was warm, and I'm not sure whether this is intentional or because all the appetizers had to be served at a go. It was lovely, generous, and really, just the kind of moreish food you look for after a day in salty St Kilda.

Choice of three meals, and I faithfully select the seafood option (though not without some internal struggle) and it's 'Atlantic salmon with snow pea, beetroot, sauce vierge and a scallop & prawn tortellini - $28.' 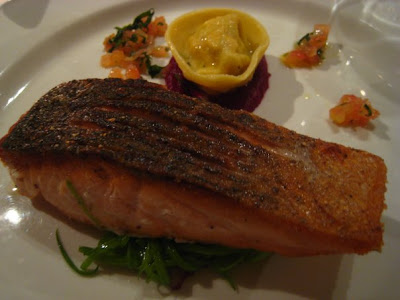 And it...meets expectations. Certainly, it's a sizeable cut of salmon, cooked well (not over or under after a Goldilocks-type examination), and the skin is perfectly crisp. I also liked the filling of the tortellini, it was very won ton/dim sum-ish. For the same reason, however, I felt the pasta casing didn't work - I know it said tortellini but I think that for such a delicate balance of flavours, a much thinner case is called for. But to be fair, the entire dish was satisfactory and arrived 'as described.' So I really struggled to figure out why I wouldn't order this again. And then it came to me - I'd been attacked by an acute case of order envy: 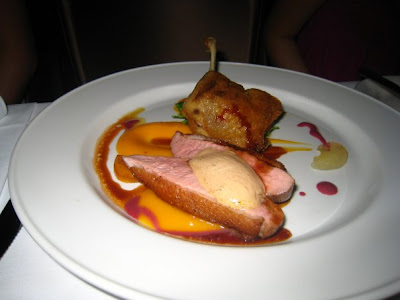 Duck 'due mode' with butternut pumpkin, mustard fruits, foie gras mousse and blackberry vinaigrette - $34.
Oh I could go into raptures about this, it is lovely, lovely, lovely. Tender, juicy, flavourful - everything a duck should be. And I know this because the hostess' father on my right generously placed on my plate one of those large chunks you see at the forefront of the picture. Which I proceeded to chew and nibble at slowly for the rest of the meal, at the expense of finishing my own.

The other options were 'Prime cut of the day with truffle mash potato, salsa verde and a veal jus' (The menu option reads 'Grain fed eye fillet' with the same garnish and is priced at $36) 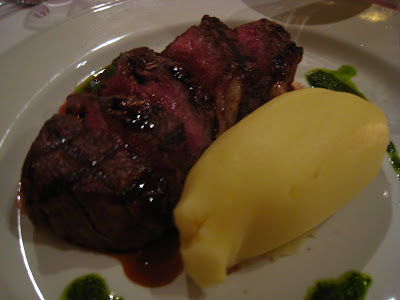 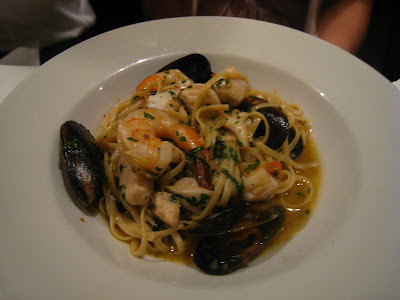 Both were good - with the steak, I'd advise future punters to order it cooked a tad under what you'd like, as the hostess' mother's 'medium well' proved well-done, while the 'rare' steak I sampled was cooked to perfection. And it's such a crime to overcook meat. The linguine, which I've had on two previous occasions is everything it should be and a very safe option if it's the kind of thing you like. Probably perfect for the less adventurous kiddies.

And finally, dessert in the form of an ultra-rich birthday cake - the 'St Moritz' from Lindt; three 'silky tiers of dark, milk & white chocolate mousse', each separated by thin layers of almond cake: 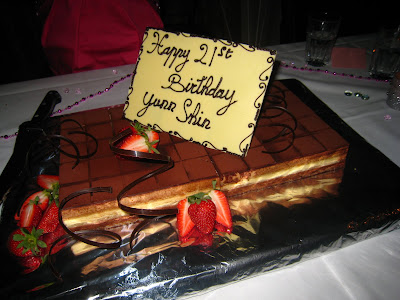 The one in the picture is actually two 'large' cakes pushed together ($65 each). Very rich, and very good. The beautiful plaque was ordered especially from Koko Black, and came packed in bubble wrap with complimentary chocolate curls - also individually wrapped. Now that's service!

And thus, Sapore - everything a fancy night out should be. Go for the duck. 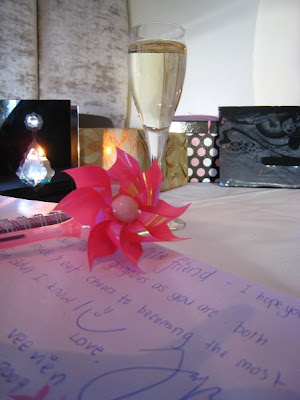