Shameless. First a post with 0% nutritional value and now this - blogging about a commercially-prepared ice cream that has been around for eons.*

*(The definition of 'eon' by the way, is an 'immeasurably long period of time' - which seems befitting)

So excuse me while I discredit myself of being anything of a food aficionado.

Because I like Magnums. I like them so much that during the period in which you could trade-in a Magnum wrapper for a gold class upgrade, and 7-11 concurrently launched a Two-Magnums-for-$6.00 campaign (I live opposite a 7-11), I must have bought dozens (no exaggeration unfortunately). The horrible irony is that I never did get to the movies during that period and instead had to ply friends and family with my wrappers so they didn't go to waste. I still have an entire paperbag full! I've put it away on my highest shelf so as to not remind me of my secret shame (I don't have the heart to throw them away).

Anyway *brightly*, I was in 7-11 today again looking for some mid-exam comfort and discovered this: 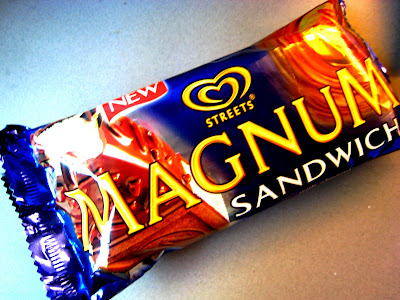 A Magnum Sandwich! Now those of you who are fellow Magnum fans will know that they consistently release new flavours every few months (the most recent of note being the 'Big Choc Bikkie' - a very rich and cloying chocolate ice Magnum and the 'White Chocolate' - which I quite enjoyed, and was released suspiciously around the same time that Tim Tam came out with White Choc Tim Tams...where will this madness end?!). As far as I know, however, this is the first Magnum 'sandwich' that's been released. I also got quite excited because it's a 'Magnum Sandwich with almonds' and regular readers will know how I do adore my nuts... 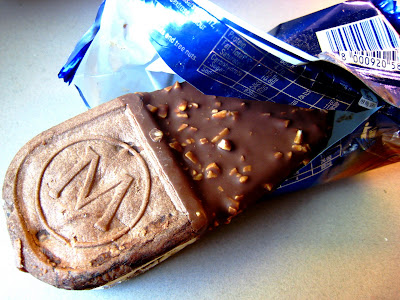 And on closer inspection, I realized that the ice cream within isn't the same as the usual Magnum kind, it's actually flecked with these black bits looking enticingly like a cookies-and-cream ice: 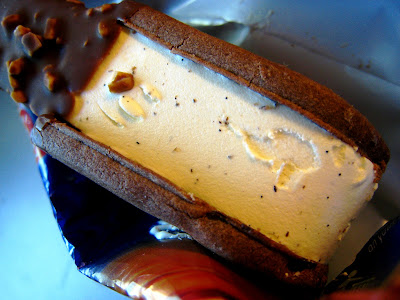 Tasted different too! I was hoping that they were vanilla bean flecks (what a hope!) but I couldn't taste any 'more' vanilla than usual, so I think they were probably just 'put in' to match the look of the obvious incumbent, Maxibon, as closely as possible: 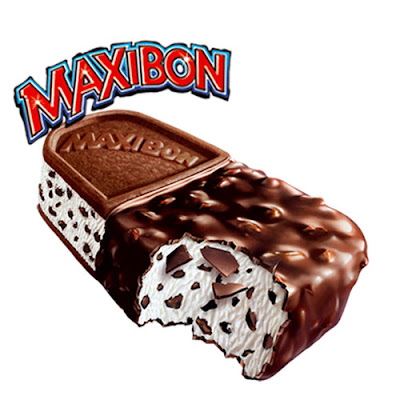 What a let-down! The ice cream was mushy and tasted 'cheap' (and even more artificial than ever), and the nut bits weren't even as big, tasty or crunchy as the ones in the classic Magnum Almond (when I was a kid, this was the only alternative to the Magnum Classic - how times have changed!) 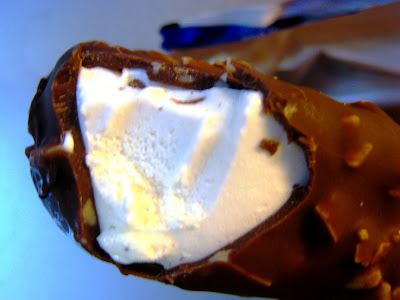 Verdict: I guess the only draw is that you get two 'textures' in one ice cream, i.e. the cookie sandwich bit and the faux Magnum Almond bit. Other than that, it doesn't compare at all with the normal Magnums. Let alone 'proper' ice-cream. How disappointing!

Back to the drawing board with ya! And back to study for me!

Before I forget, I must get my hands (...and lips! Oh yes!) on some Ben and Jerry's real soon. What did y'all think of the recent 'Rolling' invasion?

*Restaurant review soon I promise - don't give up on this blog yet!
Posted by Vee at 1:37 PM